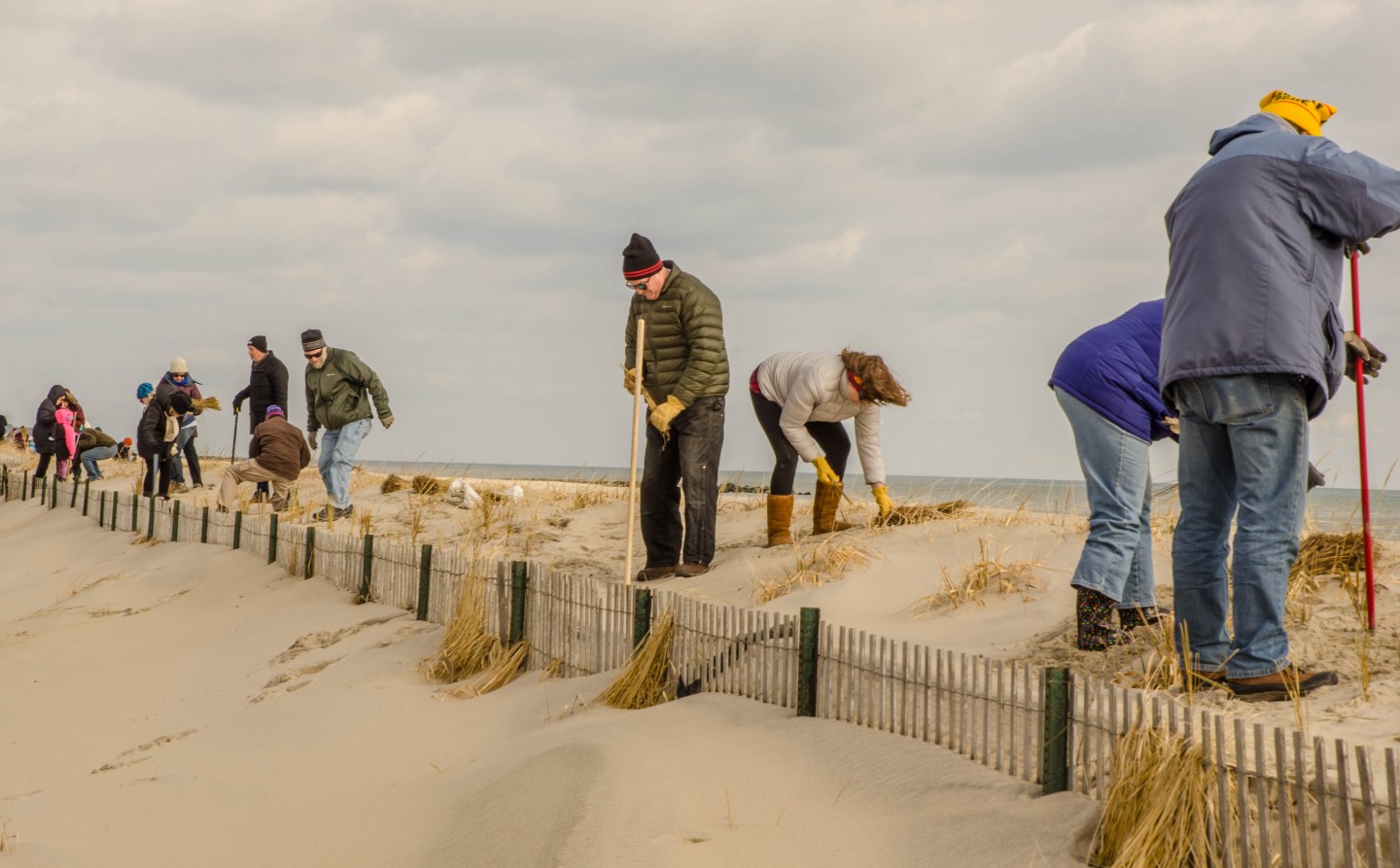 Since the fall of 2013, the one year anniversary of Hurricane Sandy, the Jersey Shore Chapter of the Surfrider Foundation has made it a priority to aid in repairing the coastal dune structures on New Jersey’s coast. The purpose of these dune grass planting events is to use ecologically sound tactics to protect coastal towns from future storms. Once the dune systems mature, the plants themselves and their extensive root systems trap and hold sand creating a natural barrier to major storms and flood. They also create natural habitat for many species of wild and native flora and fauna, adding to the beautiful landscape for which the Jersey Shore is known! In fact, dunes with mature root systems have proven to grow in size rather than shrink during large coastal storms, which says a lot about how we should manage our coast. Maybe we should nudge mother nature in the right direction rather than try to fight its natural processes with heavy machinery and overthought. 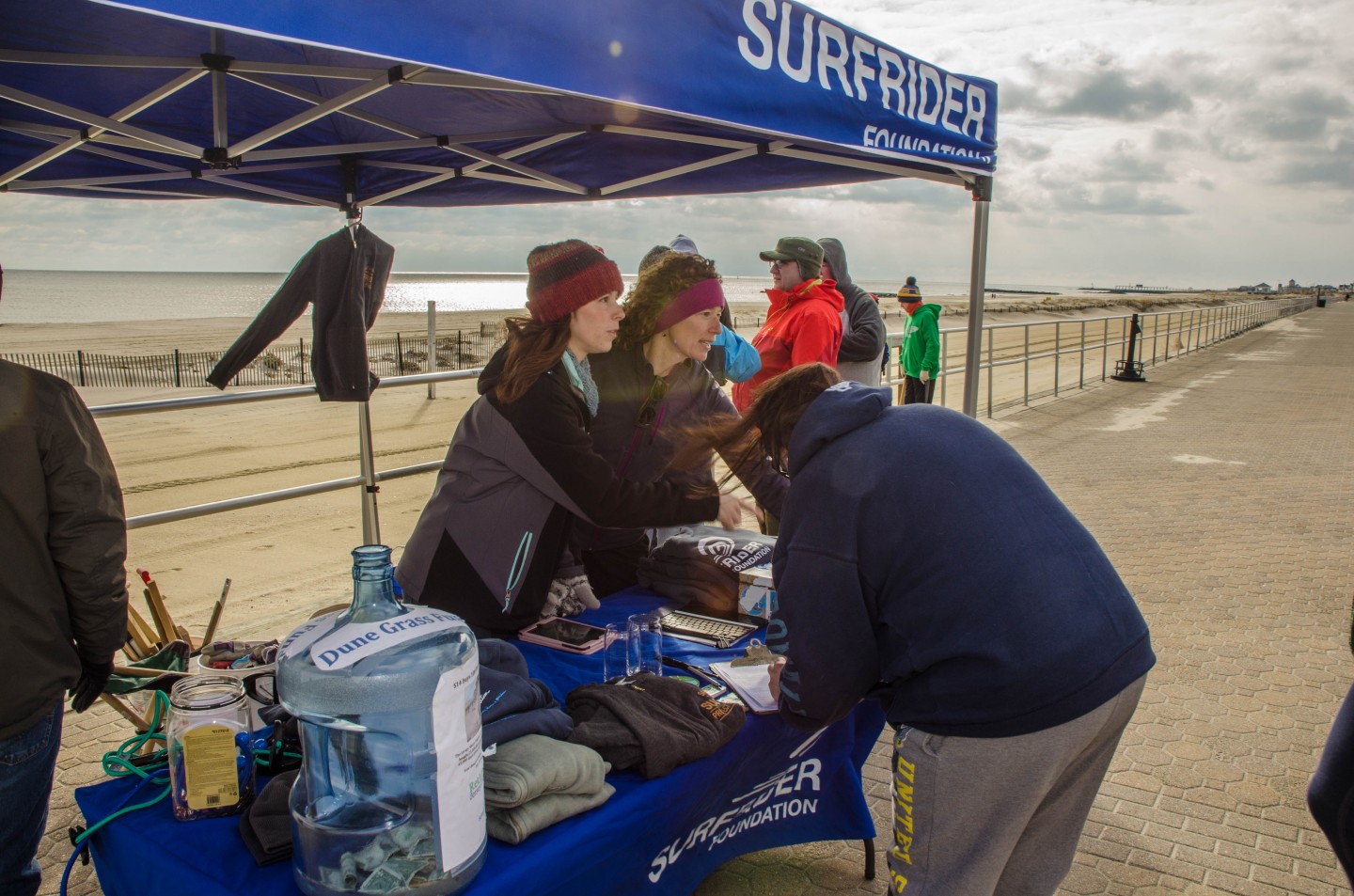 This is in contrast to some of the tactics taken by local and federal authorities that oftentimes use temporary solutions (such as armoring or beach replenishment), which can be harmful to fishing habitats & surf spots, as well as beachgoers (because metal seawalls and revetment walls often exacerbate wave erosion of sand at their base and create excessively steep and dangerous drop-offs to the beach). The worst part? These tactics are extremely expensive. We are talking about projects funded by the federal and, to a lesser extent, state tax dollars adding up to $1 billion over the past 30 years in NJ. This is compared to the measly $5,000 or so that a local non-profit of surfers and beachgoers spent to start the natural process of dune augmentation in Bradley Beach. Dunes that will require relatively little maintenance over time, but with significant long-term impact.

So far, the Jersey Shore Chapter of the Surfrider Foundation has planted approximately 85,000 dune grass plants throughout Monmouth and Ocean Counties in towns such as Lavallette, Seaside Park, Sea Girt, Spring Lake, Asbury Park, and Bradley Beach. That’s a lot of plants and a lot of volunteers! We strategically choose which towns we hold our dune grass plantings based upon their practices of  fair beach access for all visitors, which many towns on the Jersey Shore currently do not offer. The towns we choose must also be willing to actually have these dune systems in place, which, believe it or not, many towns at the Jersey Shore have chosen to forgo. This is because certain towns feel that dunes obstruct the views for their oceanfront homeowners, although many people find them to be a beautiful feature of the beachscape. These are some of the same towns that were devastated by Hurricane Sandy, where many of its beachfront homeowners received federal grants to rebuild in the same place, albeit slightly higher. 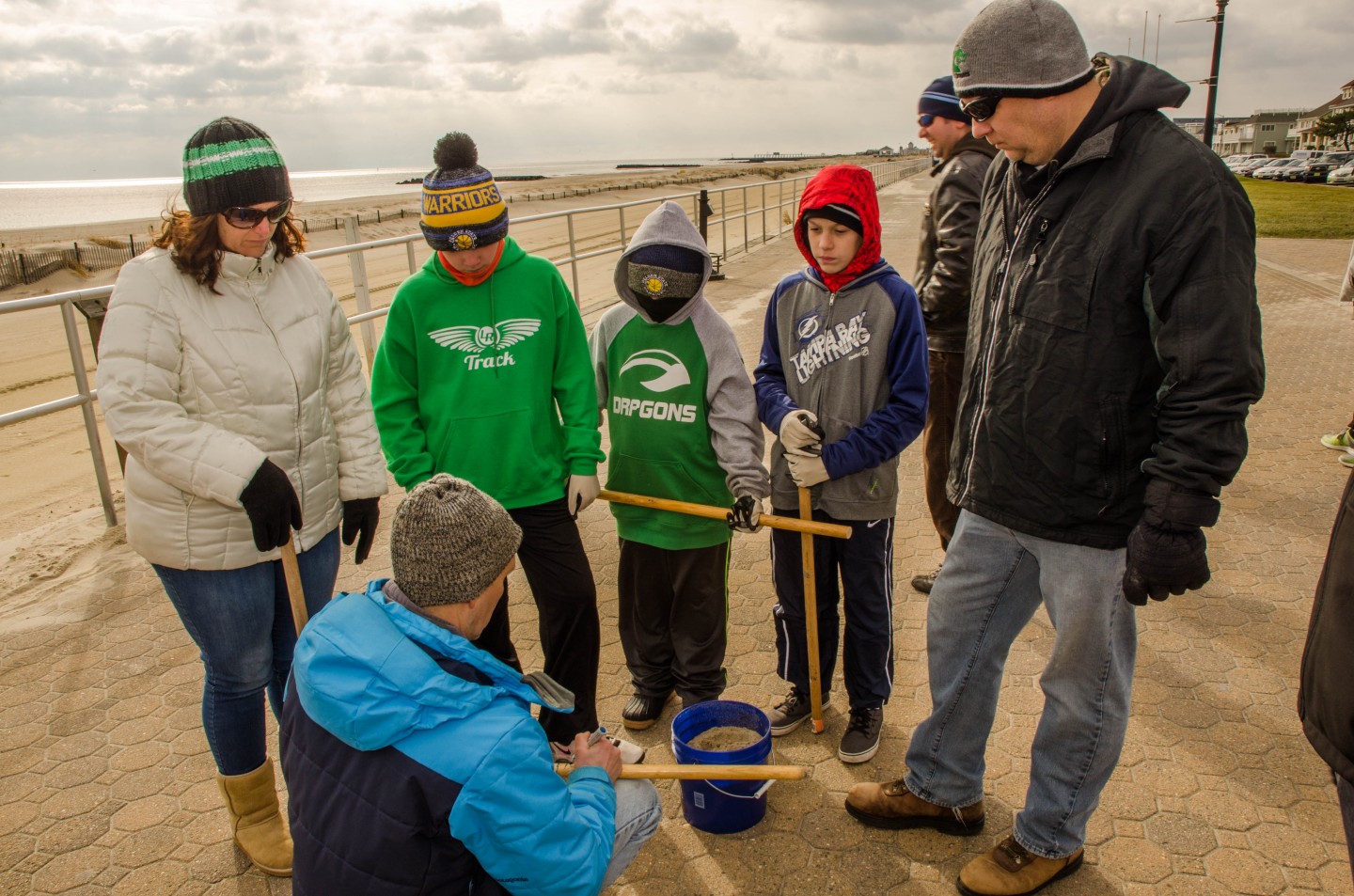 Last spring, the Jersey Shore Chapter of the Surfrider Foundation purchased 15,000 dune grass plants to aid the Bradley Beach community in reconstructing their beachfront dune system. With the help of hundreds of volunteers from both our chapter and the American Littoral Society, the plants were planted atop bare sand and recycled christmas trees for the entire length of Bradley Beach. Since then, the dune system has been steadily growing.

On January 28, 2017, the Chapter and ALS held another dune grass planting where volunteers planted an extra 10,000 dune grass plugs purchased by the Chapter. With signs of the dune system becoming more mature, the Chapter also purchased 80 secondary successional plants, including Seaside Goldenrod and Panicum grass, to be added to the leeward side of the dune system. A recent Nor’easter added a foot of sand to these dunes so they were ready for some additional plants indicative of a mature dune.

Incredibly, 135 volunteers came out to plant the Bradley Beach dunes on a cool, breezy January morning. Kids, grandparents, and everyone in between came out for their belief that their coast deserves a conscientious, scientific, and ecologically-sensitive response to sea level rise and beach erosion. 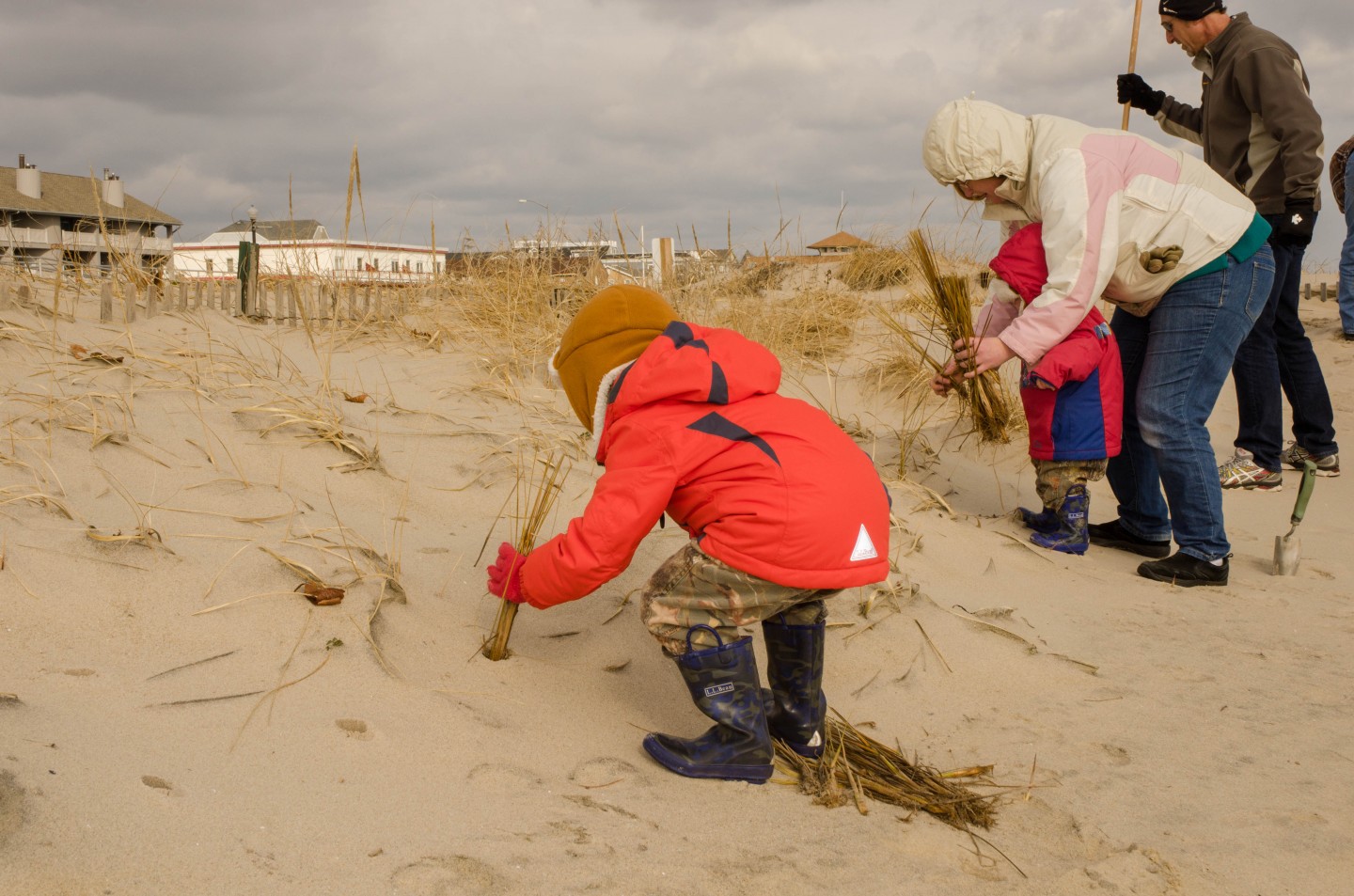 The end goal of these dune exercises are to provide proof of concept for shore towns, allowing citizens and elected officials alike to observe another approach to planning for coastal resiliency. Towns should be looking at the actions taking place in Bradley Beach and empowering themselves and their fellow citizens to take action into their own hands to protect their communities.

So, become a member of Surfrider, become engaged, volunteer, and do whatever needs to be done to help protect the coast that you love. It is the will of the people, and surfers, that drives positive change.